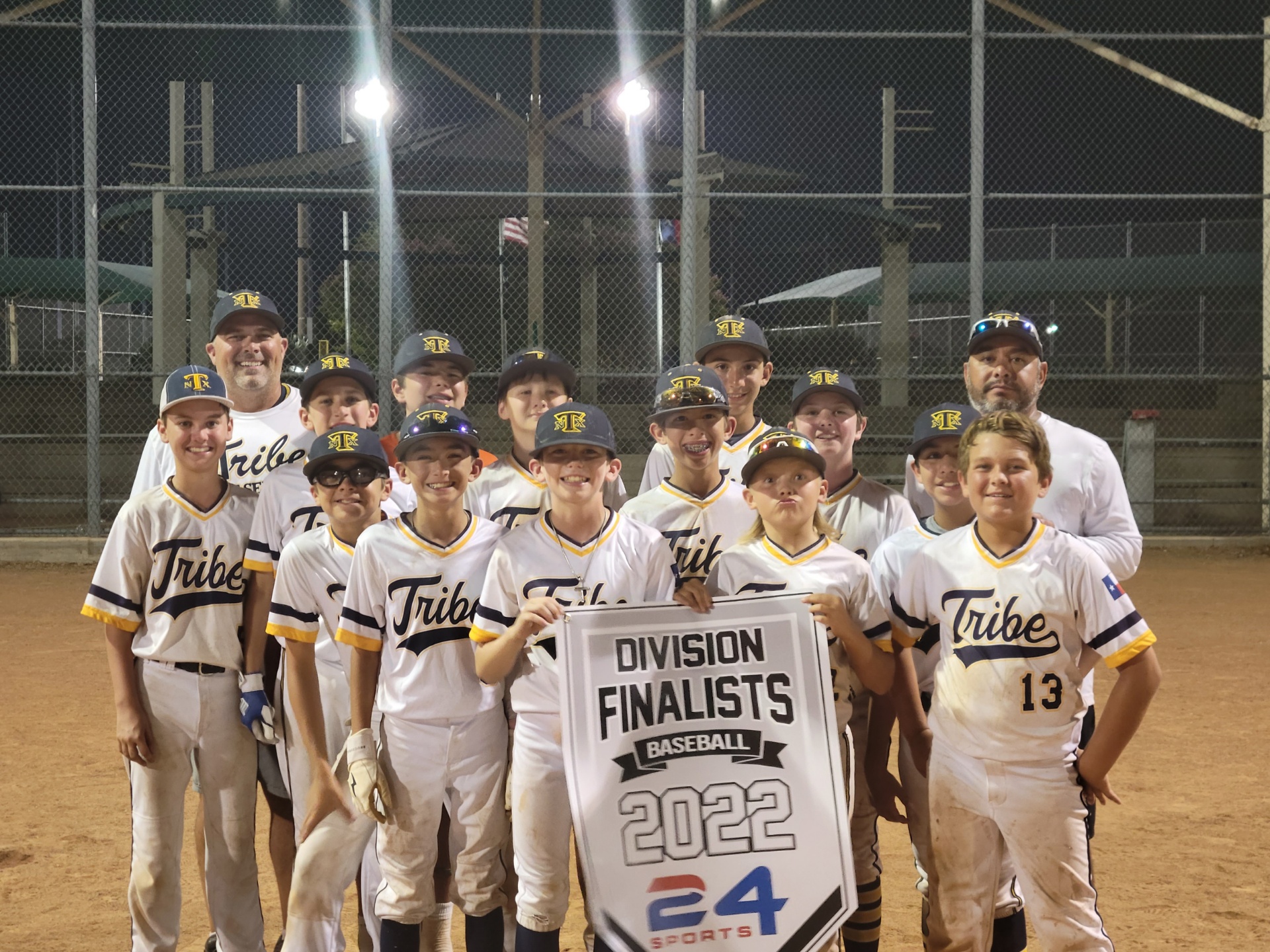 9.18.22 Tribe-Smith were Runners Up in this weekend's play 24 sports tournament.  Sunday games began at 8:00 A.M. and ended at 8:30 p.m.  The boys played a total of 4 games on Sunday.  The boys beat the #1 seed (who were unbeaten) in the semis 10-4.  The pitching was great the entire tournament.  Over half of the team had on base percentages above .500.  William Cate led the team in batting hitting .583 for the weekend.  It was a long and fun weekend of baseball. 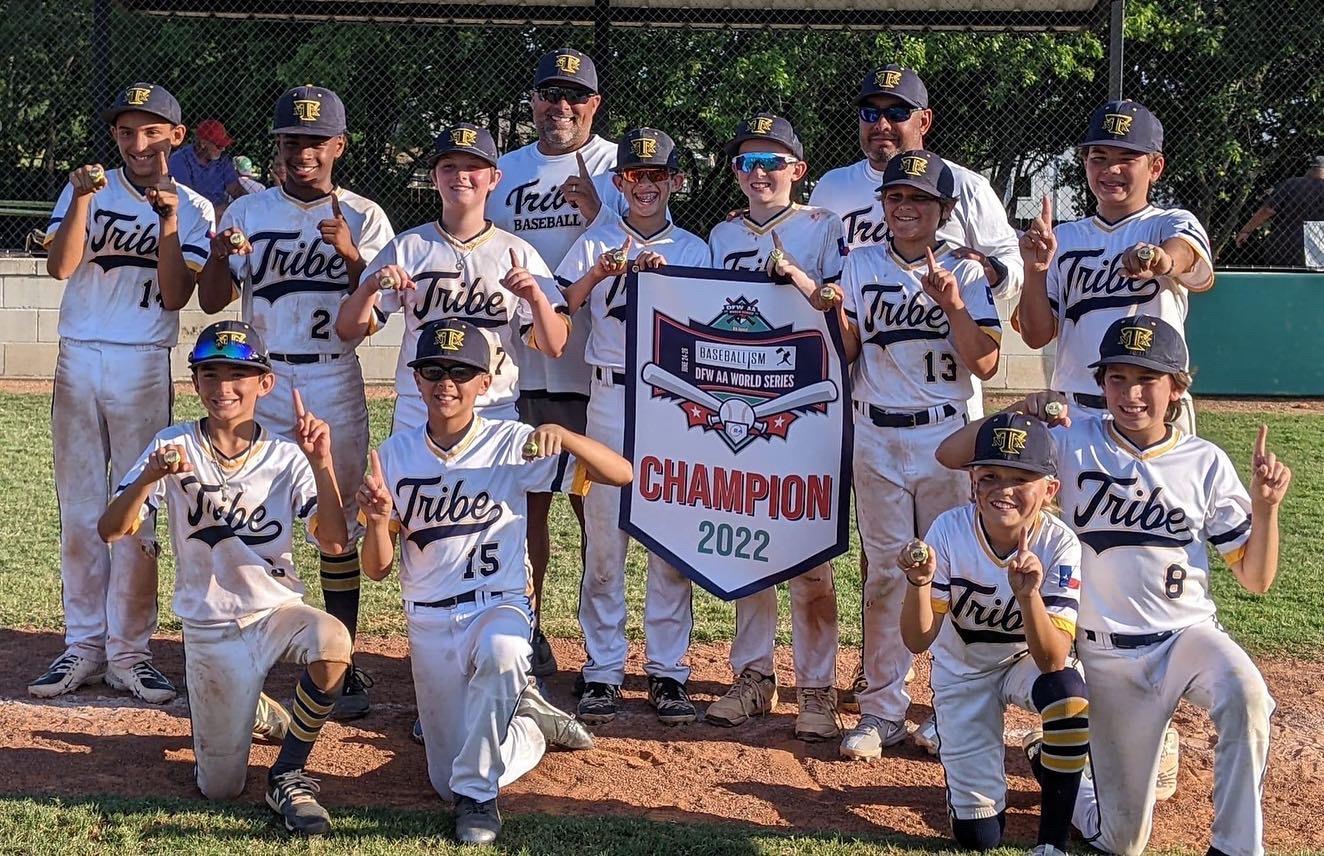 Saturday the boys faced the Coppell Cowboys.  This was a team that had beat them 16-0 a few weeks back and went undefeated that tournament.  The boys came in with a different mindset this time.  The boys won 8-5.  Blake Smith and Evan Novotny lead the Tribe with 2 hits each.  Evan Novotny and Alex Armstrong each had inside the park home runs.  The boys lost 6-2 in game two that day.  Evan Novotny had another inside the park homerun.  The boys came ready to play Sunday.  They once again played the Coppell Cowboys and won 8-3.  Drew Cole came in relief and threw 3 innings.  He struck out 3, allowed 3 hits, with 0 runs allowed. A.J. Lopez lead the Tribe with 3 hits.  In the championship game, the boys were up 2-1 before giving up a 3 run homerun.  The boys fought back to tie the game 4-4 and go into extra innings.  Each team had the bases loaded and 1 out to start the innings.  The Tribe made a double play to start off the extra inning.  The first batter Alex Armstorng hit a single to bring in the winning run.  Alex Armstrong lead the Tribe with 2 hits.  Drew Cole and William Cate both pitched great.  Evan Novotny got the MVP award for the tournament.  It was a great weekend.  I couldn't be more proud of the boys. 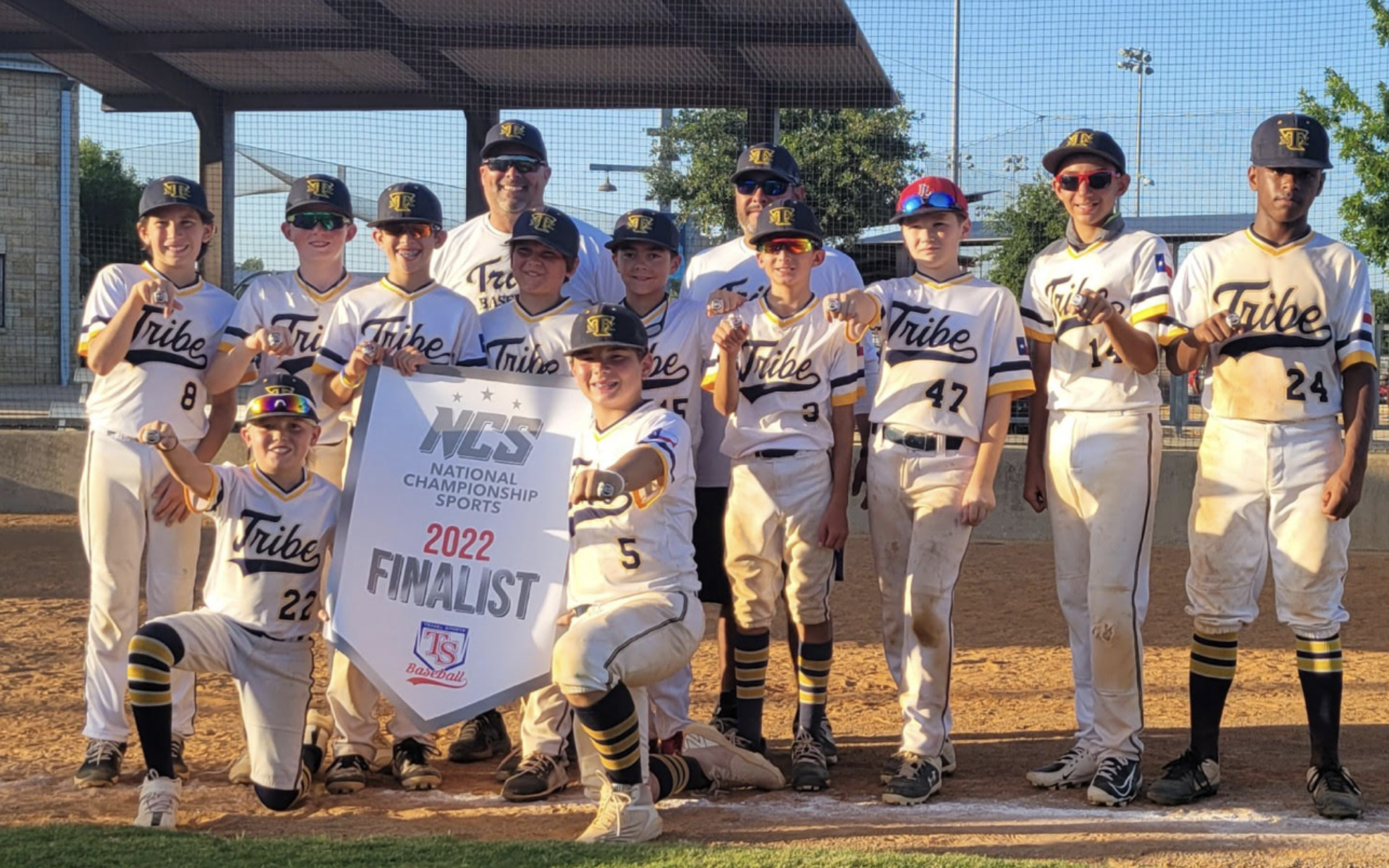 12u Smith played in the TSB Beat the Heath South this past weekend.  They started sluggish on Saturday and came into Sunday as the #5 seed.  Game one was against the #4 seed Cavalry Baseball.  The boys won 9-2 behind a brillant pitching performance by William Cate.  William pitched 4 innings, allowed 3 hits, 1 run, and struck out 8 batters.  His changeup was on.  Evan Novotny, William Cate, AJ Lopez, and Alexander Madrid all lead the team with 2 hits each.  AJ hit one homerun and had another hit the top of the fence.  In game two, the boys got paired up against the #1 seed Texas Edge.  The boys won a hard fought game 12-8.  Blake Smith, AJ Lopez, and Connor Sherwood lead the team in hits with two hits each.  The boys then played in the championship game against the #2 seed WF Indios.  In a 90 minute game, the boys lead for 90 minutes.  As time expired the Indios hit a 2 RBI double for a walkoff 4-3 win.  Cole Boylan went 4.1 innings striking out 3.  Connor Sherwood lead the team in hits with two hits..  Even though the boys came up short they fought all the way until the end.  I am so proud of how they played. 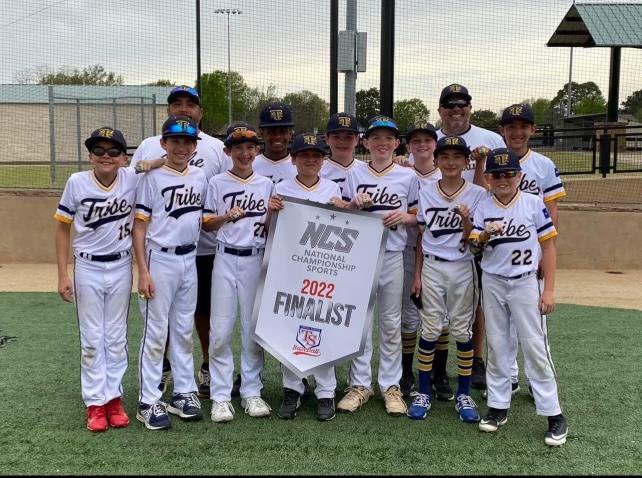 12u NTX Tribe Smith played in the TSB Texas Open Series 1 tournament in Grapevine this weekend.  The boys went 1-1 on Saturday.  This got them the 8:00 a.m. game Sunday.  The boys won 4-1 against the Dallas National team.  Blake Smith and Connor Sherwood led the Tribe with 2 hits each.  Drew Cole pitched a great game only giving up 1 run in 5 innings while striking out 4.  The boys then beat the Southlake Dragons 8-1.  Alexander Madrid had a brillant pitching performance.  He was 1 hit and 1 error away from a perfect game.   He went 5 innings striking out 13 and not allowing an earned run.  Alex Gonzalez led the Tribe in hitting with 2 hits.  The boys then beat the Frisco Riders 3-2 with yet another great pitching performance by Evan Novotny and Connor Sherwood.  Combined they went 6 innings allowing only 2 runs.  Evan Novotny and Alex Gonzalez led the Tribe with 2 hits each.  We came up short in the championship game and lost 6-3 against National Baseball Academy.  Blake Smith led the Tribe with 2 hits.  The boys had a great weekend of baseball.

Boys had an amazing weekend, going 3-1 to take 2nd place at Mavs Ballpark Wood Bat tournament. First one like this for each kid, and we only had 3 broken bats! It was so much fun watching them fight through the cold weather and stick it out to overcome some of the games. We went 2-0 on Saturday only giving up 2 runs which put us 1st place seed and getting first round bye on Sunday. Beat the dugout united team in the bottom of the 6th inning with a bunt/steal home from William to win the game and advance to the championship game where we ended up losing to the Wolfpack Baseball team. That game went scoreless until the 4th inning. All around a great set of games for us.

Season Champs and Tournament Runners Up

12u-Galvez finished up Frisco’s Sunday double header 2nd place in the championship, 1st place in regular season. From the Coach: We were 11-2 total with 150 runs scored, and only 48 runs allowed. They worked their tail off to get this point and I couldn’t be more proud of them.

12U-Galvez has their first home run of the fall 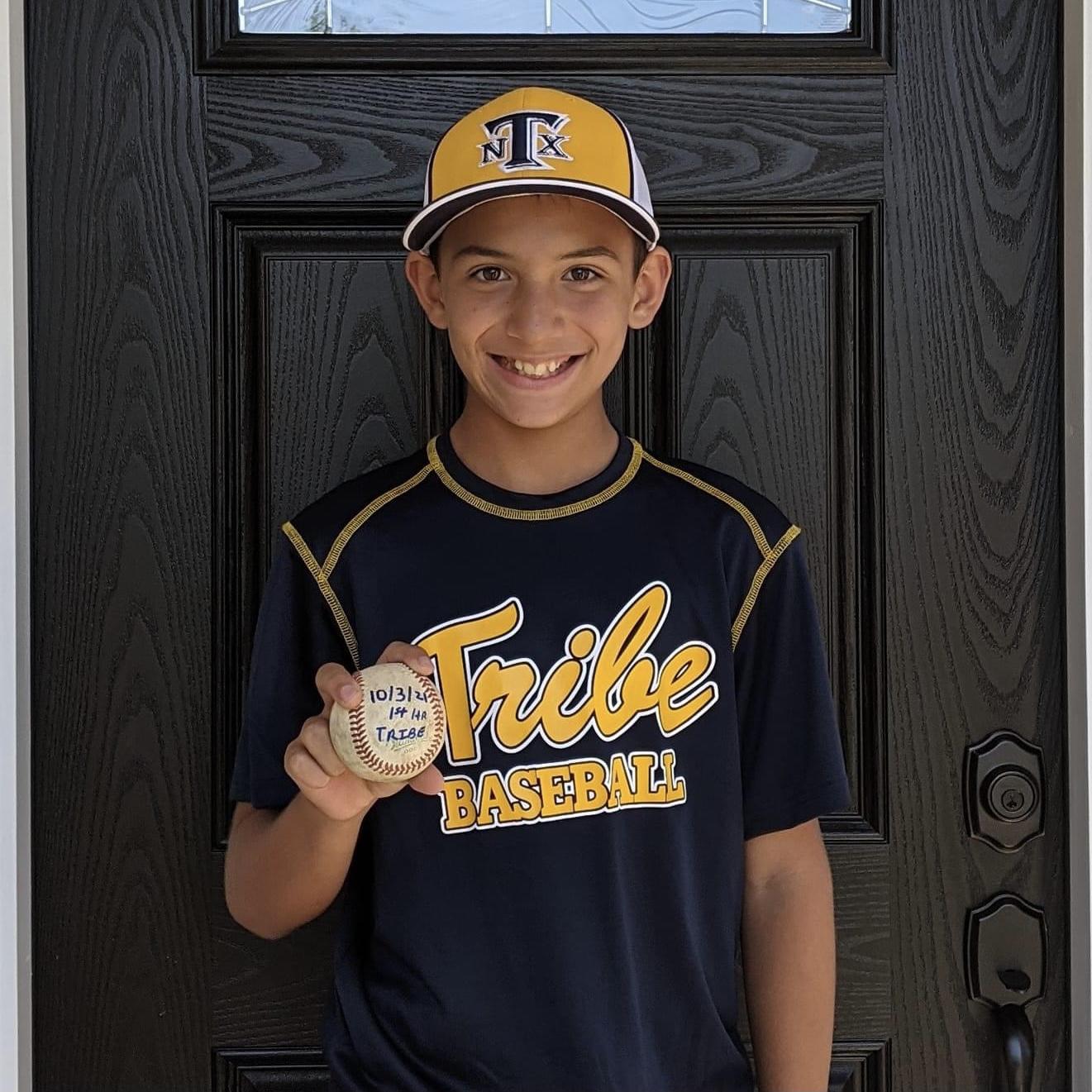 Newcomer to the team, AJ Lopez, hammers his first bomb of the season today! This kid had five RBI’s on the day helping his team secure two victories in league play.  Welcome to Tribe and congratulations on a great day to all of our 12U players!

Lemonade out of Lemons!!

There were more than a few Tribe teams that got rained out this weekend, but 11U Galvez made the most of it! With their game well underway and into the 4th, it got called. Both dugouts bummed, their opponent started a friendly game of *tic tac toe* (see pic). They said "why not" and went along with it. Then came the dance off. Then the REAL fun... a wet, muddy, messy game of kickball!! But it didn't stop there, but the "end" several other teams had joined and memories were made. "Life isn't about waiting for the storm to pass, it's about learning to dance in the rain." -Vivian Greene

Runners Up at Mavs Ballpark Tourney

4.11.21 | Another great weekend of baseball! Tribe’s 11U Galvez team went into Sunday’s 8am game seeded 3rd after their pool play games on Saturday at Mavs Ballpark. Winning that one, the semifinals game didn’t come around until 2:30pm making for a long day. But it wasn’t over yet. After another long break, they went on to play in the Championship game but came up short of gold in the end. Coach Galvez shares, “I’m so proud of them and the way they came together as a team and rallied through being at the fields all day. They looked great defensively and outstanding offensively. They make me enjoy being their coach.” Way to go Tribe!!

"Our first game back was exactly like I expected. The chemistry these boys have is remarkable and it’s like they didn’t miss a beat at all. All the boys stayed busy through the Christmas break working on themselves and improving whatever they could. The boys, coaches, parents and myself were excited to be back out on the field!" -Coach Galvez

The Spring 2021 Season is in full SWING! Pics and Schedule COMING SOON! 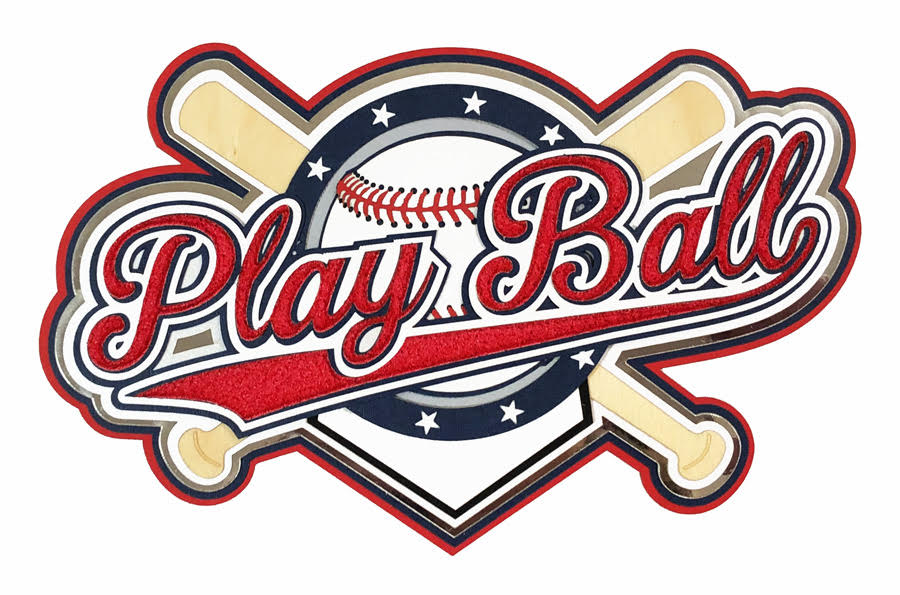 6.28.20 | After coming back from behind to win both first games back to back they boys made it to the ship. Played their hearts out and ended up with 2nd place in their division. All in all it was a great three days. First tournament since COVID was a success and glad it was the World Series

2.22.20 | It's go time! With just a couple days away from Spring 2020's first game of the season, this 10U team is PUMPED for Monday's opening season game! Here's to an exciting and exceptional Spring Season!

Gearing up with some pitching practice!

Feb 10th | Tribe's 10U Galvez team stretches it out during their 2nd pitching practice with Coach Matt Reilly at Southfork Sports Complex. You can find them there every Monday in February!

Runners Up in the Halloween Bash

11.3.19 | After being visitor and being up by one run we had to hold the #1 seed to no runs being scored to advance to the ship. Bottom of the 4th inning they went 3 up 3 down to end the game. We fell short of winning the championship game but the boys played as hard as they could and I couldn’t be happier with them!

The boys battled it out and then...

10.6.19 | Coach Galvez shares: "Today was a great day at our doubleheader. Tied the first place team MC Elite and then beat them next game 10-9. It was all-around 2 great baseball games, defensively and offensively."

Fall Ball has begun for 10U Galvez! 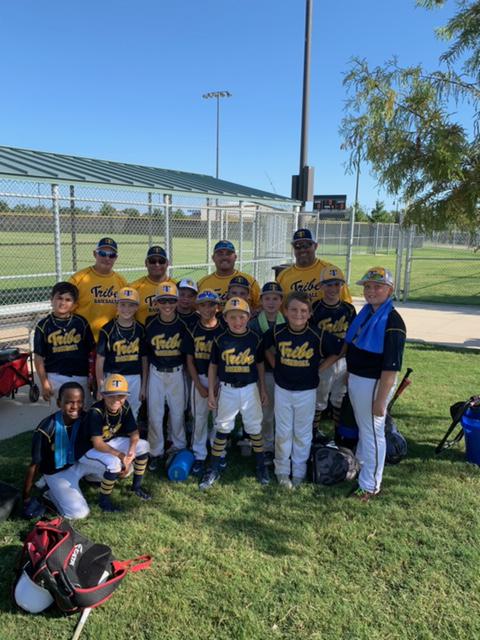 The season starts off 1-1 as the boys participate in Frisco's Sunday Double Header League.

9U Galvez Competes in the 'Strikes Against Cancer' Tournament 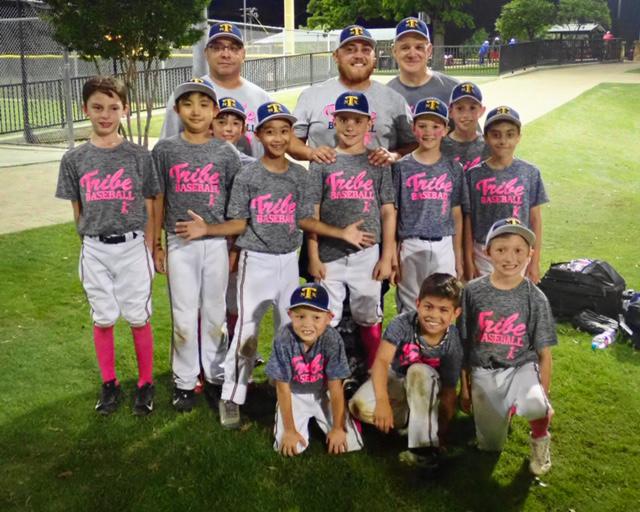 5.5.19 | Coach Galvez shares a bit about why they chose THIS tournament for the team:

"My wife and I both hold cancer near and dear to our hearts after losing family members to different types, and to just get to be able to play in a 'Strikes Against Cancer' tournament was an honor for us. The boys are happy they get to do things like play in tournaments that have a deeper meaning, rather than just playing to win a ring/championship game." 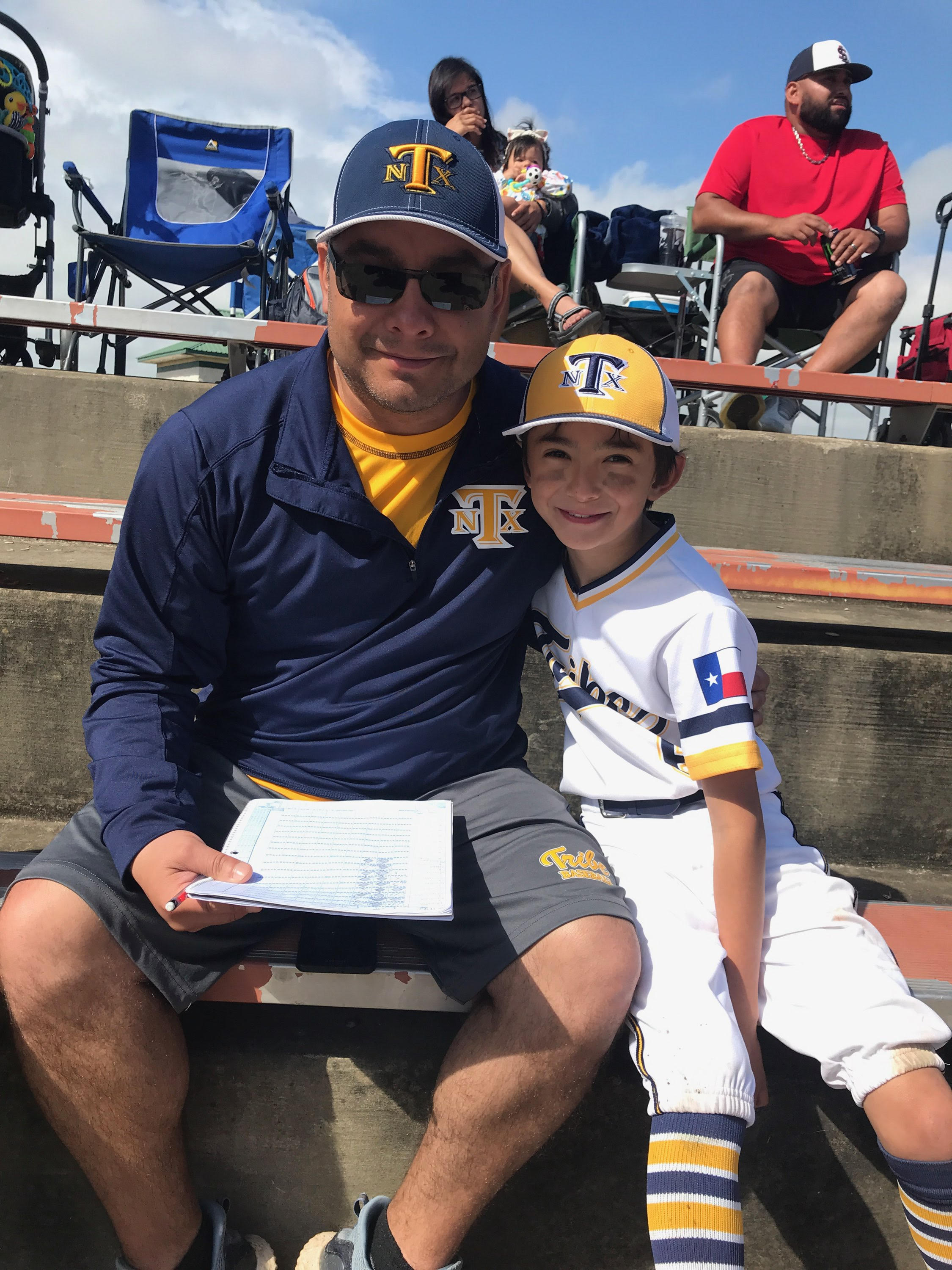 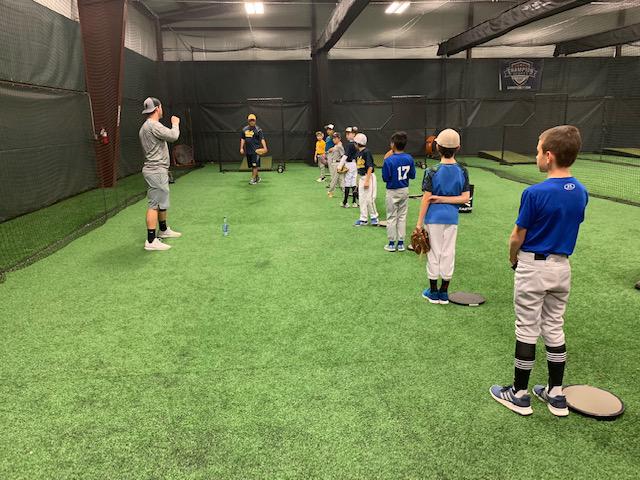 The boys start the season with their first pitching lessons of 2019.